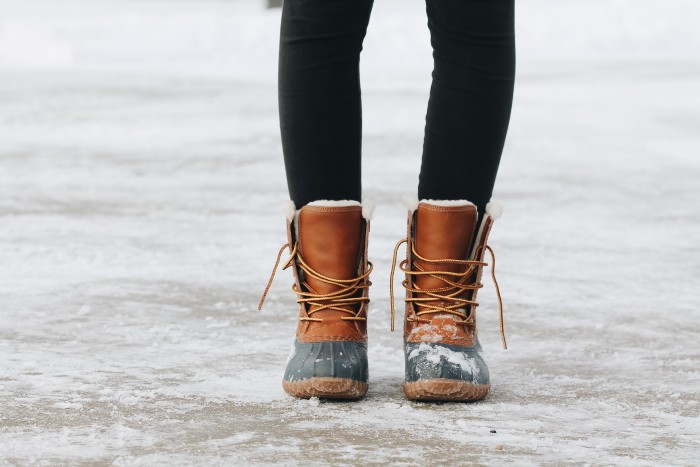 In Canada, the arrival of cold weather has a lot of benefits! It means that the holiday season and winter break are around the corner; that ski hills, ice rinks, and snowmobile trails will soon be open; and that community winter sports are about to begin, if they haven’t already. But the cold weather also brings with it a variety of safety concerns, including the heightened risk of slip-and-fall accidents. In this blog, we’ll look at ways to mitigate that risk with a focus on proper footwear. We’ll also provide contact information to help you reach an experienced slip-and-fall lawyer if you should be injured in an accident.

Most slip-and-falls are embarrassing, or even a little funny. But they can also cause serious injuries, particularly in older people. According to the Canadian Institute for Health Information (CIHI), slip-and-falls resulted in more than 67,400 emergency room visits in Canada in 2019. A small percentage of those were likely to result in serious injuries, including some that will have necessitated the help of an experienced slip-and-fall lawyer.

Here are some simple, common sense safety precautions you can take to prevent this type of accident:

Some Boots are Better than Others

Not every winter boot is equipped for harsh Canadian winters, no matter what its manufacturers say. In fact, low-traction winter boots are so common that a research team at the KITE Research Institute in Toronto, part of the University Health Network’s Rehabilitation Institute, has developed a testing protocol and reporting website to spread the word about boots that don’t make the grade.

Last month, CBC News Marketplace published an investigation that pitted several winter boots available for purchase in Canada against each other. Each boot was tested using an adjustable ice-covered floor – the steeper the incline the tester was able to walk without slipping, the better the boot was graded.

KITE’s research team, led by Sophia Yue Li, requires that a boot be able to walk at an incline of seven degrees to receive a passing grade. Only one of the boots tested by the CBC passed the test: the WindRiver Backwoods Waterproof Hyper Dri 3, with which the tester was able to walk at 15 degrees of elevation. The feature that set this boot apart from its rivals from Merrell, Sorel, Kamik, Ugg, and Timberland: fibre embedded soles. The abrasive microfibres grab on to ice and slick surfaces, providing superior traction.

None of the other brands’ boots passed the test, which came as no surprise to the research team; approximately 90 per cent of boots for sale in Canada fail the slip test. Some, like the model from Kamik, don’t even allow flat-surface walking without slippage.

“If a pair of footwear does not enable you to walk on that gentle slope both ways [up and down] then it’s not safe footwear [for walking on ice],” Yue Li told the CBC.

Not even the safest walkers wearing the best boots on the market can avoid a slip-and-fall forever; tumbles on the ice are part of living in Canada, after all. If you or a member of your family has been seriously hurt in a slip-and-fall accident, it’s important to reach out to an experienced slip-and-fall lawyer from Will Davidson LLP as soon as possible. Our team will listen to your story, assess the viability of your claim, and explain the next steps in the legal process. In some situations, such as with slip-and-falls on municipal property, you may have to act quickly to avoid surpassing the statutory limitation period.

Contact us today to learn more about how we can help.