Judge Rules that Defendant did not react in self-defence.

The Toronto Star posted a great article here a few days ago about a Moses Mahilal  who came home to find someone in his mother’s house.  He made a beeline for the kitchen, grabbed a large knife and ran upstairs, where he confronted the intruder hiding behind a door and seriously wounded him. Hours later Mahilal was under arrest and charged with aggravated assault. A preliminary hearing is set for Sept. 11.

I often get this questions from a civil perspective. What if someone breaks into my house and I hurt them, can they sue me? What if someone claims assaults me – how far can I go to defend myself?

The case below is a good example of our Courts’ analysis on how far the argument of self-defence can really take you.

In the case of Ellis v. Fallios-Guthierrez the plaintiff Ellis sued the defendant for battery claiming that he suffered significant physical and emotional injuries in a fist fight.  The fight between the two men took place in the defendant’s basement apartment in the early morning hours of January 20, 2006.

About the plaintiff and defendant 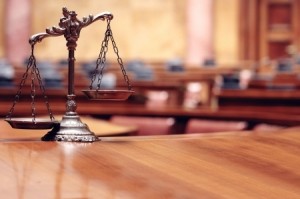 At the time of the assault, the plaintiff was 21 years old.  He was living at home with his parents and siblings.  He had a full time job.  He enjoyed sports and socializing.  He essentially lived a life that any man his age would live.  The case tells us that the plaintiff was romantically interested in a young woman named Melissa DeLuca.  They were friends for quite some time and the plaintiff always wanted to take the relationship the next level.  Another interesting thing about the plaintiff was that he a knife collection, together with his brothers.  When he was approximately 12 years old he started collecting different types of knives.  Once in a while he carried one of these knives in his pocket for his protection.  He never threatened or hurt anybody throughout his life and he denied ever taking them out to a movie theatre or a bar.

The defendant was 35 years of age at the time that the events happened.  He lived with his sister in the basement apartment of the home that she owned with her family.  He had a criminal record, specifically, having convictions for impaired driving, assault, mischief and possession of a weapon.

The plaintiff and the defendant became friends approximately one year before the event in question.  They lived in the same area.  They began to hang out once in a while and talk about cars, their families, problems and women.  They would often go out for dinner or have drinks together.

At one point the defendant met Ms. DeLuca, the plaintiff’s romantic interest.  Notwithstanding the difference in their age (and the fact that she was the love of his friend’s eye) the defendant began to pursue her romantically.  He sent her flowers, sent her presents and wrote her poetry.  These feelings were not reciprocated by Ms. DeLuca.  He persisted nevertheless but she made it clear on numerous occasions that she wanted him to stop contacting her.  It got to the point where he would attend her place of work.  She had to eventually get a restraining order to prevent the defendant from pursuing her.  The plaintiff was clearly upset and angry with the defendant about his conduct and relation to Ms. DeLuca.  The plaintiff eventually cut off the defendant from friendship and stopped talking to him.  At one point the plaintiff forgave the defendant, but they did not return to their previous level of friendship.

On the evening on January 19, 2006, the plaintiff met up with some friends at a barbeque.  He had a couple of beers.  He eventually went to the Moose and Firkin at approximately 10:00 p.m. they had some more drinks and played pool.  The defendant was there.  The plaintiff and the defendant talked and all seemed well.  The plaintiff and his friends decided to leave the bar to go to another sports bar.  The defendant tagged along.  On the way to the second bar, the parties argued.  The arguments continued when they got out of the truck and were in the parking lot of the bar.  At one point, according to the plaintiff, the defendant stuck a lit cigarette in his mouth, chewed it and then spat in all over the plaintiff’s chest.  A pushing match began but eventually one of the plaintiff’s friends intervened, stopped the altercation and achieved peace between the parties by suggesting that they go have another drink.  The manager of the second bar had witnessed what happened in the parking lot and prohibited everyone from entering.  According to the plaintiff they all agreed that they wanted another drink and the defendant invited them back to his basement apartment.  The plaintiff was still frustrated with the defendant for spitting on him.

What occurred at the plaintiff’s apartment was divergent among the parties.

The Court’s Decision – was this self-defence?

The Judge analyzed the tort of battery and also a defence put forth was that the defendant, which he believed that he was using self-defence.  The law states that an individual is legally justified in employing intentional force against another, if such force is used as a preventative measure to defend themselves or their family.  The law tells us that the force used by the defendant must be reasonable and proportionate to the harm that is threatened.  It cannot be excessive.  It must not be used a vehicle for opportunistic revenge or disproportional counter-attack.  What is reasonable depends on the facts of each case.  Assessing the general proportionality of the force used by the defendant, there must be some flexibility or leeway accorded.  Also, in contrast to criminal law, the onus of proving that the use of force by the defendant was in self-defence is cast upon the defendant who invokes the defence.  The defendant must prove not only that the occasion warranted defensive action, but must also show that the force was not excessive.

Doctors testified that the plaintiff lost more than 25% of his lip tissue.  Even after cosmetic surgery he had permanent scarring around his lips and did not have a normal facial smile expression.  He suffered decreased sensation and motor function of his lips.  The damage had a big impact on the plaintiff’s life.  He continues to suffer social embarrassment, diminished self-esteem, an undercurrent of despondency, depression and anxiety.  He cut himself off from his friends and family and suffers from social phobia stemming from his embarrassment over his facial scarring.  His psychological impairments greatly hampered his future career goals and social relationships.  The Judge awarded the plaintiff $50,000.00 in compensatory damages for pain and suffering and loss of enjoyment of life, the plaintiff was also awarded $1,000.00 in special damages to pay for additional reconstructive surgery.

Whether or not he can collect the awarded compensation is obviously another story.