Nearly 50K Judgment Against Premiere Fitness for Not Having Proper Functioning Cleaning System in Place When Man Injured.

In the recent case of Dhaliwal v. Premier Fitness  the plaintiff Sukhjinder Dhaliwal sued premier fitness for a personal injury he suffered while exercising on a weight machine. He sought damages for pain and suffering, as well as compensation for loss of past income, loss of future earning capacity, and some special damages for medical expenses. 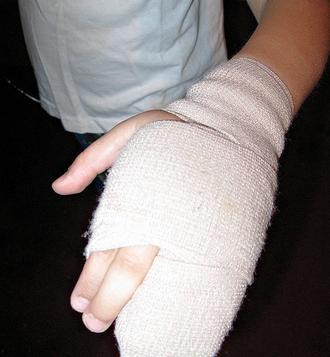 The facts were fairly interesting. On the day in question the plaintiff was exercising his legs. At some point he began the weight training part of his exercise regime by using the vertical leg press machine. He told the Court that he was familiar with it and that he had probably used it over 100 times. The vertical leg press is the machine where a person lies on his back and pushes the square metal platform up with his legs. There are plated weights on either side of the machine. Once the weights have been moved to this upward position, the person is then able to move aside, with their hands, the locking mechanisms the weights otherwise rest upon. This allows the weights to be moved up and down freely with the legs, and with as many repetitions as desirable.  Once the repetitions are complete, the person again pushes the weights to the upward position, and then moves the handles of the machine inward again to restore the safety locking mechanisms.  When the “weight sled” is safely returned to its original locked position, the person using the machine can then get up from the bench.

The plaintiff did 3 sets. After his third set he went to get a drink of water. He was wearing Nike workout shoes. He had to walk about 90 feet to the fountain. When he drank from the water fountain that day, the plaintiff noticed that the floor around the fountain was soaked with water, and then he realized that his shoe was wet. Getting his shoes wet around the water fountain had happened to him before.  When this had happened in the past, he had informed the management of the club. As he walked back to the leg press machine he “stomped” his feet to try and get the water off them. He got back to the machine and took a look at his shoes and thought that they were ok.

He got back on the machine and began to push the weight sled upward. His right foot slipped off the foot platform toward him.  At that point, his hands were still in the handles on the safety mechanisms.  When his right foot slipped off the platform, he lost his balance and his whole body moved to the left.  He knew he could not hold the entire weight with only one leg, so he quickly tried to move the safety lock mechanisms back into place.  He was not successful.  Instead, his right hand moved toward the downwardly moving weight sled, and the end of his right pinky finger got caught under the weight sled and was crushed. The plaintiff maintained that his right foot slipped off the foot platform as a result of the water that was still on his shoes from the water fountain area.  The plaintiff testified that it was not the weight itself that was the problem.  He had lifted even greater weight in the past.  He was not worried about being able to lift the 365 pounds.

The accident effectively amputated the end of the fifth finger of the his right hand.  At the hospital, the plaintiff went through a surgical revision of this amputation under a regional anesthetic.  The wound was cleaned, stitched and dressed.  The plaintiff took only a few days off from work, and returned shortly to his job.  He was in occupational therapy for some three months.  He made a relatively speedy recovery, but the amputation is a permanent and serious disfigurement of the his right hand. Unfortunately his nail bed did not stop growing and he had to return for more surgery to remove this still-growing nail bed.  He spent just one day in the hospital, but the surgery left him with further stitches and on medication and caused him to be off for work for three weeks.

Liability – Was Premiere at fault?

The question that was asked was whether Premier Fitness were in breach of their statutory duty of care, or whether they kept the fitness club premises reasonably safe for its members (as required by s. 3(1) of the Occupier’s Liability Act.)  The plaintiff’s lawyer relied on a lot of “supermarket cases” which in a sense, is a similar situation.

The first thing the Court looked at was the maintenance system that was put in place by Premier Fitness.  The Court noted that the club had contracted a full time cleaning staff.  The arrangement was to have one male and one female cleaner in the club at all times during operating hours.  Their directions were to “keep it clean”.

The fitness club staff and other employee were also expected to help clean the club.  If any of them became aware of spilled water, they knew where the mops were and understood that there was a common sense approach on quickly dealing with cleaning up anything messy.  The club further testified that their members were somewhat sloppy when they filled their water bottles at the fountain, causing water to be spilled.  They acknowledged that whenever they noticed water they would put a yellow wet floor sign in the area.  There was also a perforated mat around the water fountain which would allow water to move to the floor.

The plaintiff, on the other hand, argued that the water spilling from the fountain was a chronic problem and that the defendant neither fixed the problem nor put a system in place that would reasonably ensure the safety of its members.  There were no regular inspections at the water fountain area despite its chronic water spillage problem.  There were no logs kept to prove that such inspections had taken place.

What did the Judge say?

The Judge was satisfied that the plaintiff established in all circumstances of the case that the defendants failed in their affirmative duty to make Premier Fitness reasonably safe for its members by taking reasonable care to protect them from the foreseeable harm of chronic water spillage.  The Judge reached the conclusion not because of any deficiency in the maintenance program that Premier Fitness devised for their fitness club, but rather because there is a complete absence of evidence that this maintenance program was implemented and in proper and active use on the day of the plaintiff’s accident.  In other words, they say they have a system in place but there is no evidence that the system in place was working.

There is little point in having an effective maintenance system in place to protect customers, patrons or members of an institution if that maintenance program is not consistently and routinely followed and practiced.  If a store, airport, shopping mall, grocery store or gym has a maintenance program in place; it must be fully and properly implemented in practice especially on the date when someone injures themselves.  The Judge realized that there was some sort of reasonable maintenance system in place at Premier Fitness.  He recognized that there was a floor mat put down around the fountain.  He realized that there was a janitorial closet close by filled with mops and that any employee in the facility was required to quickly clean up if they saw there was water.  The Judge found that the gym was not supposed to guarantee any absence of water on the floor.  For example, it would be unrealistic to simply remove the fountain, exchange the fountain for a different fountain or hire someone to maintain a visual guard of spilled water.  All of this is unrealistic.  What the Judge was saying is that there was no evidence to prove that the defendant cleaner’s routinely followed any type of reasonably strict cleaning schedule and/or maintained a log of regular inspection to ensure the defendant’s direction were followed in practice.  Also, the judge realized that the plaintiff argued that there was no evidence that this maintenance system was being followed on the day the plaintiff was injured in the fitness club.  In the Judge’s words, “it may have been operational – there is just no evidence before me that it was operational”.  There was no evidence that there was even a single cleaner on duty in the defendant’s fitness club.  No such cleaner was called as a witness to give evidence.  No business records were tended to show that a cleaner had been at work that day.  None of the witnesses that were called to give evidence in the case testified about the presence of a cleaner in the fitness club on the day of the accident.  The Judge noted that presumably, had there been any cleaners present at the fitness club throughout the club’s hours of operation on the date in question, perhaps the defendant’s maintenance system could have been contemplated.  The Judge found it would have been easy enough to establish that fact but rather there was no evidence at all to suggest that this aspect of the maintenance system was operational that day.  Secondly, even assuming that if there were two cleaners in attendance at the fitness club on the date of the accident, there was no evidence presented as to the activities of those cleaners on the day of the accident.  There was nothing showing that the water fountain area was inspected or cleaned on any part of that day.  There is no evidence that on the day in question, anyone placed a yellow wet floor sign on the floor to warn of the potential dangers of the wet floor.

The plaintiff proved in the case that the defendants were in breach of their duty and care.  An adverse inference was drawn against the defendants for their failure to call evidence on any of the above.

Accordingly, for the reasons above, the Judge was satisfied on a balance of probabilities that Premier Fitness failed in their legal duty to make the gym reasonably safe for their members by taking reasonable care to protect people from foreseeable harm on that day.  They permitted puddle water to collect near the water fountain, near the weight room knowing that members frequented the water fountain during the course of their workouts, on a regular basis through that day.  The Judge found that the accident was in fact caused by the water on the plaintiff’s shoe.  The Judge found that the plaintiff’s right foot slipping off of the leg press platform on the vertical leg press machine was the only plausible explanation for that accident which caused his injury.  The total amount of compensation awarded to the plaintiff was $48,884.84.

Pain and Suffering and Loss of Income Award