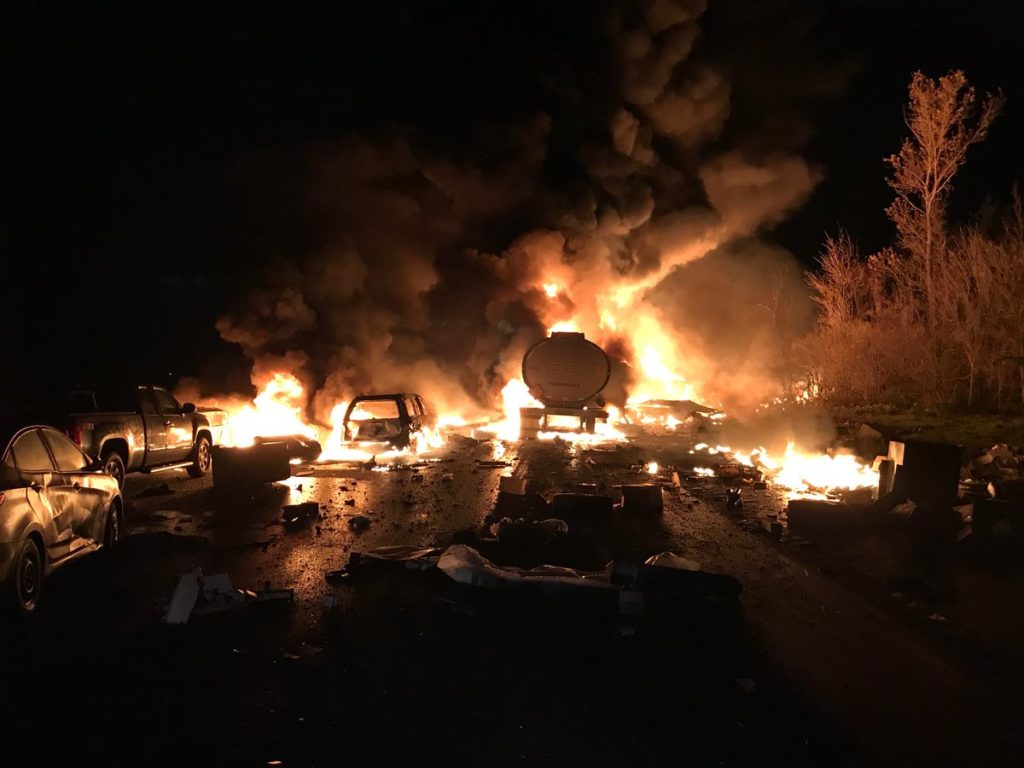 A multi-vehicle collision involving fully loaded tanker trucks on provincial Highway 400 has spawned calls from safety advocates and motor vehicle accident lawyers for improved road safety on Ontario’s highways. The 14-vehicle accident, which occurred north of Toronto on Halloween night, caused three fatalities and left a small patch of the highway engulfed in flames. One police officer described the scene as “Armageddon.”

The Ontario Safety League (OSL), a not-for-profit organization dedicated to reducing preventable deaths and injuries on the province’s roads, is calling for a coroner’s inquest to determine how similar accidents can be avoided.

“All of the parties that are involved in road safety in this province want to see things get better,” OSL President and CEO Brain Patterson said to the CBC. “There is no finger pointing, there’s just an opportunity to bring good parties together and come up with best practices for this province.”

Police believe both distracted driving and impaired driving contributed to the carnage: a suspected impaired driver is thought to have caused the initial backup, and an oncoming tanker truck collided with the delayed vehicles, the CBC reports.

Distracted driving has been an area of acute concern for law enforcement officers, motor vehicle accident lawyers, and safety advocates over the past several years. Unfortunately, efforts to curb the behaviour have been largely unsuccessful. In 2016, distracted driving contributed to more road fatalities than drunk driving or speed-related accidents.

“The message has not hit home to everybody. There are still many individuals who think they can multitask,” said Elliott Silverstein, government relations manager for the Canadian Automobile Association. “Your hands need to be on the wheel, your eyes on the road and focused on that, not stopping to rubberneck and look at incidents on the road, but making sure you are keeping the right amount of distance, following the rules of the road.”

“These trucks are, in essence, missiles,” he said.

Though road fatalities have fallen in Ontario in recent years, from 517 in 2014 to 439 last year, trucks contribute to roughly 20 per cent of those deaths. Members of the trucking industry acknowledged they have room to improve.

“We are at a level of excellence with regards to mechanical fitness and driver behaviour,” said Ontario Trucking Association president Stephen Laskowski. “But we know we can do better and we know that through technology, enforcement and education we are going to get there.”

If you have suffered an injury in a traffic accident, contact the motor vehicle accident lawyers at Will Davidson LLP to find out how our experienced and compassionate team can help.