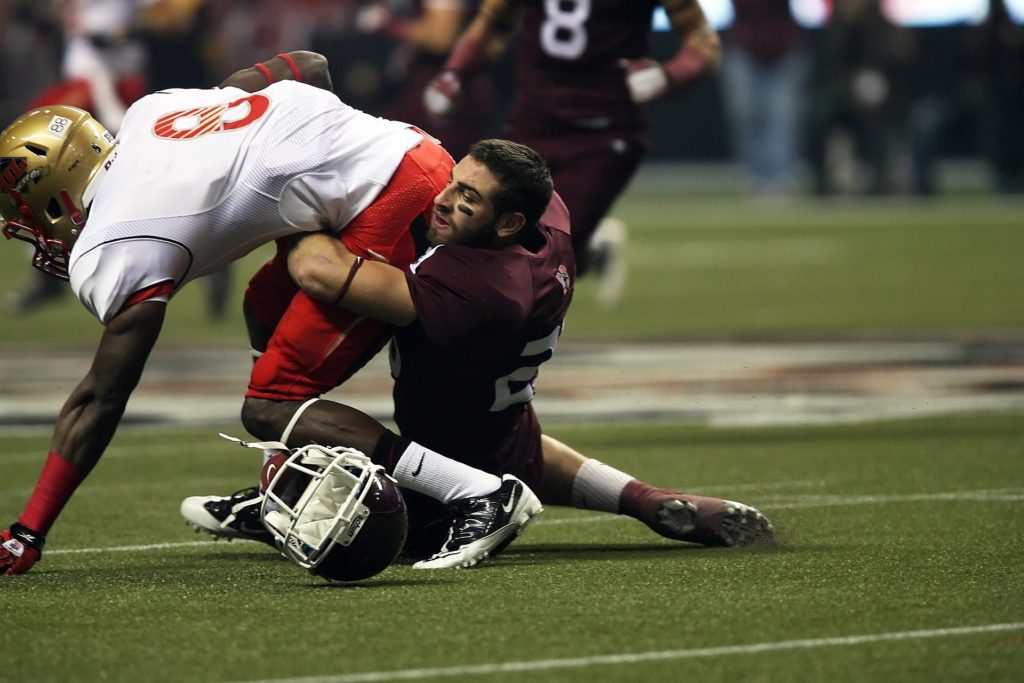 What is being done to address the pervasiveness of concussion in sport?

It’s no secret that concussions are pervasive in contact sports like football and hockey, but new research published in the Journal of the American Medical Association (JAMA) suggests the problem may be even more widespread than previously feared.

The study, which has caused alarm among brain injury lawyers, was conducted by researchers at Boston University. It discovered chronic traumatic encephalopathy (CTE), a neurodegenerative brain disease caused by repeated blows to the head, in 99 per cent of dead NFL players’ brains. Symptoms of the disorder include memory loss, confusion, impaired judgment and impulse control, aggression, anxiety, depression, and in some cases suicidal behaviour.

Critically, the study’s authors emphasized that football players are not the only group at risk of developing CTE.

“There’s no question that there’s a problem in football. That people who play football are at risk for this disease,” Dr. Ann McKee, director of Boston University’s CTE Center and one of the study’s co-authors told CNN. “We urgently need to find answers for not just football players, but veterans and other individuals exposed to head trauma.”

Stakeholders across Canada – including concerned brain injury lawyers – are continually discussing methods of limiting concussions in young athletes. Parents in British Columbia, for instance, are debating a campaign to ban bodychecking in bantam hockey (ages 13-14), according to the CBC.

Researchers for the University of Calgary estimated that 86 per cent of minor hockey injuries, including concussions, are caused by bodychecking, and the American Academy of Pediatrics has recommended raising the age of bodychecking explicitly to avoid concussions in younger players.

While preventative measures like raising the bodychecking age could marginally reduce concussion risk, organizations like Parachute Canada, a national charity dedicated to preventing injuries, are taking a broader approach. On July 28, 2017, the group released Canada-wide guidelines targeted to physicians, parents, coaches, teachers, and athletes to help diagnose, manage, and treat concussions. Like the proposed body-checking ban, keeping kids safe is a key aim.

The new Canadian Guidelines on Concussion in Sport, which you can find right here, includes an accessible definition of the injury; addresses common misconceptions around concussions; provides advice on what to do when a concussion occurs; and warns that wearing protective equipment is not a failsafe preventive measure. The guide was written to apply to all levels of athletes across the country.

“What we wanted was for the recommendations to be the same for a child playing Timbit hockey in Newfoundland to a national team soccer player in Vancouver,” Dr. Michael Ellis, co-chair of Parachute Canada’s advisory committee, told the Globe and Mail. “In this way, all Canadian sports stakeholders are on the same page about what their specific roles and responsibilities are in keeping our nation’s athletes safe.”

Contact the brain injury lawyers at Will Davidson LLP

If you have suffered a concussion or other serious head injury while participating in an organized sport, you should contact an injury lawyer right away to assess your legal situation. At Will Davidson LLP, our team of experienced brain injury lawyers can offer guidance and advice on how best to pursue compensation for the damages you have incurred.