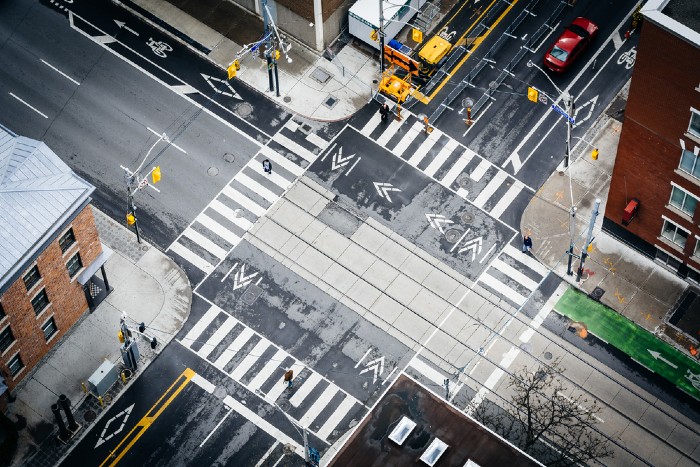 In 2016, the City of Toronto launched its Vision Zero Road Safety Plan with the ambitious goal of eliminating traffic deaths and serious injuries. The plan was welcomed by car accident lawyers and road safety activists who had seen different versions of the Vision Zero strategy successfully implemented in cities around the world.

Part of the reason that Vision Zero has been so successful is its focus on infrastructure. The framework aims to slow vehicles down through a variety of rules-of-the-road changes and physical traffic calming measures. It also prioritizes modes of active transportation. like walking and cycling, that lead to fewer serious injuries.

Toronto’s Vision Zero strategy has been less successful than other cities’ – traffic fatalities had not significantly decreased by the time the COVID-19 pandemic took hold in early 2020. However, the city has recently undertaken several modest infrastructure projects that could meaningfully impact road safety. They have even earned praise from a handful of car accident lawyers and road safety activists, both groups that are notoriously difficult to satisfy.

In July 2021, the city installed rubber speed bumps in the intersections of Sheppard Ave and Kennedy Rd and Finch Ave and Sandhurst Cir. The bumps force drivers to take slower and sharper left turns into crosswalks, which makes pedestrians and cyclists more visible. Left turn collisions with vulnerable road users are a prominent cause of injury and death, the city said in a release.

New York City has been running a similar pilot project since 2016. According to CBC News Toronto, pedestrian injuries fell 20 per cent at New York intersections with speed bumps, and the average turn speed fell by an average of 52.6 per cent.

“There’s plenty of times where I have wished that there were measures to keep drivers turning slower and better able to see me,” Kevin Rupasinghe of the road safety group Cycle Toronto told the CBC. “And I’m really confident that we’ll see those results with this type of measure – it just had to be rolled out a lot more intersections.”

Speed bumps were scheduled to be installed at six additional high-risk intersections by the end of August.

Sticking with intersections, Toronto confirmed plans this summer to accelerate another infrastructure project aimed at protecting pedestrians in crosswalks. Several years ago, the city began installing traffic signals that give pedestrians a five second ‘head start’ over vehicles. The aim, once again, is to increase the visibility of vulnerable road users. More than 500 signals have already been installed, with another 389 scheduled for installation by the end of 2021, according to CBC News Toronto.

Not enough data has been collected to measure the impact of head start signals in Toronto, but city traffic management director Roger Browne told the CBC that research from the National Association of City Transportation Officials suggests they can reduce pedestrian collisions by up to 60 per cent.

“I think it’s a wonderful idea. It’s simple,” said Jess Spieker of Friends and Families for Safe Streets to the CBC. “Nobody seems to be upset about it. Unlike some road safety measures, it seems to be instantly accepted.”

Last month, the city was scheduled to wrap up improvements to bike lanes on Bloor St East between Sherbourne St and Castle Frank Rd. The work would widen the lanes and add concrete barriers between cyclists and vehicles on the busy stretch of road.

There is ample research from around the world that suggests bike-friendly cities are safer for vulnerable road users. It’s not only cyclists that benefit from bike lanes: pedestrians are much less likely to be seriously injured in collisions with bicycles, and narrower roads force vehicles to move more slowly, which makes them inherently less dangerous. In fact, most of the infrastructure and rules-of-the-road changes that car accident lawyers and road safety experts would like Toronto to consider are focused on vehicle speed. There have been calls to implement a blanket 30 km/h speed limit on non-highway streets in the city, as well as suggestions to narrow certain high-speed routes, as has been done in New York and Montreal.

As car accident lawyers know, pedestrians and cyclists are exponentially more likely to be seriously injured or killed in a collision with a vehicle traveling at 50 km/h than a vehicle traveling at 30 km/h. Widening bike lanes, adding traffic calming infrastructure, and emphasizing pedestrians’ right-of-way at intersections are all effective ways to slow drivers down, but more will have to be done if the city plans to accomplish its goal of eliminating traffic deaths altogether.

If you’ve been injured in a traffic accident in Toronto, Oakville, or elsewhere in southern or central Ontario, contact Will Davidson LLP today to schedule a free, no-obligation consultation. Our team of experienced Ontario car accident lawyers will review your case, explain your legal options, and provide the guidance and support you need on your road to recovery.